The measurement of fill levels of liquids, bulky goods, pastes, adhesives, and chemically aggressive materials in an industrial application is an important part of process monitoring and control. This is especially so as more and more industrial automation is implemented and hence requires reliable measurement data in order to provide management information, as well as enable automated corrective decision-making.

This article looks at some of these technologies typically used for level measurement, followed by a look at one example of capacitive sensors.

The type of technology deployed for level measurement can depend on the liquid or material type, whether it is corrosive, whether single point level or continuous measurement is necessary, container size, and operating environment (such as high temperatures). In order to make those decisions, here’s an overview of each of the different technologies used to measure fill levels.

Optical level sensors use the properties of light to detect liquid level. Consisting of a light emitter and a photodetector, the latter measures the reflected light. If a liquid is present it will either refract or limit the reflected light, resulting in a corresponding change in the electrical signal.

While this is an invasive method requiring contact with the liquid, it can be inexpensive and useful for level and leak detection under high temperature and pressure. Optical sensors are in general not very accurate and may not work if they’re dirty. Optical sensors might have problems with reflective surfaces and waving materials.

Capacitive:
With different materials having different dielectric constants, a capacitive sensor essentially measures the change in capacitance between two electrodes inserted in the tank as the medium level rises or falls. They can be used for liquids and bulk materials (e.g. sand, plastic granules) in a range of applications for level monitoring in the chemical, water, wastewater, food, pharmaceutical, and mechanical engineering industries. These sensors are very accurate, robust, and reliable, though would require some level of calibration to the medium. Ultrasonic systems might have problems with crossing reflections at waving materials.

Ultrasonic: these level sensors emit ultrasonic waves and based on the time taken and strength of the reflected wave, this provides a measure of the distance between the sensor and the liquid. This is an accurate, non-contact method that is not affected by the material being measured. However, they can be expensive and have problems with foaming liquids and complex tank geometries and don’t work at vacuumed tanks. Because of the time-of-flight measurement principle, there is an idle zone at the top area of a tank and the tank cannot be filled completely.

Radar: the principle is similar to ultrasonic, but radar sensors feature an antenna that transmits microwave frequency signals rather than sound.

The level of the material being measured is based on the time for the reflected microwave signal.

These sensors can be very accurate and require no calibration but are also expensive. Problems are similar to ultrasound but radar also works in a vacuum. Radar sensors are normally used for long-distance measurements (1m…30/50m) in applications in for e.g. silos/grains.

Vibration: a method particularly useful for liquids as well as powders and fine-grained solids in mining, chemicals, and food industries, vibration sensors feature a fork-shaped sensing element that vibrates at its own natural resonant frequency.

Conductivity: these use probes which have a current applied between two electrodes to measure conductivity or resistance.

These are low cost and invasive, but sense only conductive liquids and the probe is likely to erode over time.

Float: another sensor for simple high or low-level indication is the float switch, which either rises or is lowered when the liquid level rises or falls in the container or tank.

This mechanical measurement does not require any power and can be inexpensive, though they can be relatively large compared to other sensors and less reliable

Load: load sensors measure the weight of a tank to gauge the level, with the sensors typically attached to the support framework of the tank to measure the force applied by the mass of the container. Any change in weight corresponds to a change in level. Load sensors can be used for liquids as well as solids, assuming the material is of constant density.

With many different technologies, here is an example of one particular type, as illustrated by capacitive sensors from CAPTRON.

As the diagram above shows, the functional principle of capacitive level measurement is based on a changing condenser capacity. In this case, the probe rod and the tank wall from the two electrodes, while the liquid or material functions as the dielectric medium. A level change causes a change in capacity. An empty tank has a low capacity; a filled tank has a high one.

The selection criteria are based on several factors – for example, if the tank is metal, then one-rod probes are used, otherwise, in plastic tanks a double-rod probe or a jacket tube probe could be better. Environmental conditions, such temperatures above 100°C and protection requirement (eg. IP67) will determine the need for an external amplifier or type of connector.

Different industry sectors make different demands on products and materials. This is why CAPTRON provides a range of combinable and customizable probe systems. Depending on application and tank type, its system enables the creation of the probe configurable to very specific customer needs, right up to the probe length adjusted to the nearest millimeter. Customizability is an important part of the consideration, especially when there are varying tank sizes. CAPTRON meets this demand by making custom length probes or even double probes, with the sensors capable of measuring many liquids and powders without corroding due to material options.  Custom sensors can be created based on customer demand, in particular, the length of the rod can be determined in by the inch, and delivered within two weeks. CAPTRON’s level sensors are extremely reliable (we have installations working over 20 years) and very accurate. CAPTRON provides services for precise calibration to the tank geometry, the measured medium (DK value) and other influencing factors as temperature, movements of an agitator, and so on.

Please change C to C0 on the left picture. On the right picture it should be C = C0 + DC. I would remove the vertical arrow with DC, because the measurement is from the rod to the wall of the tank.

the Differences at a glance... 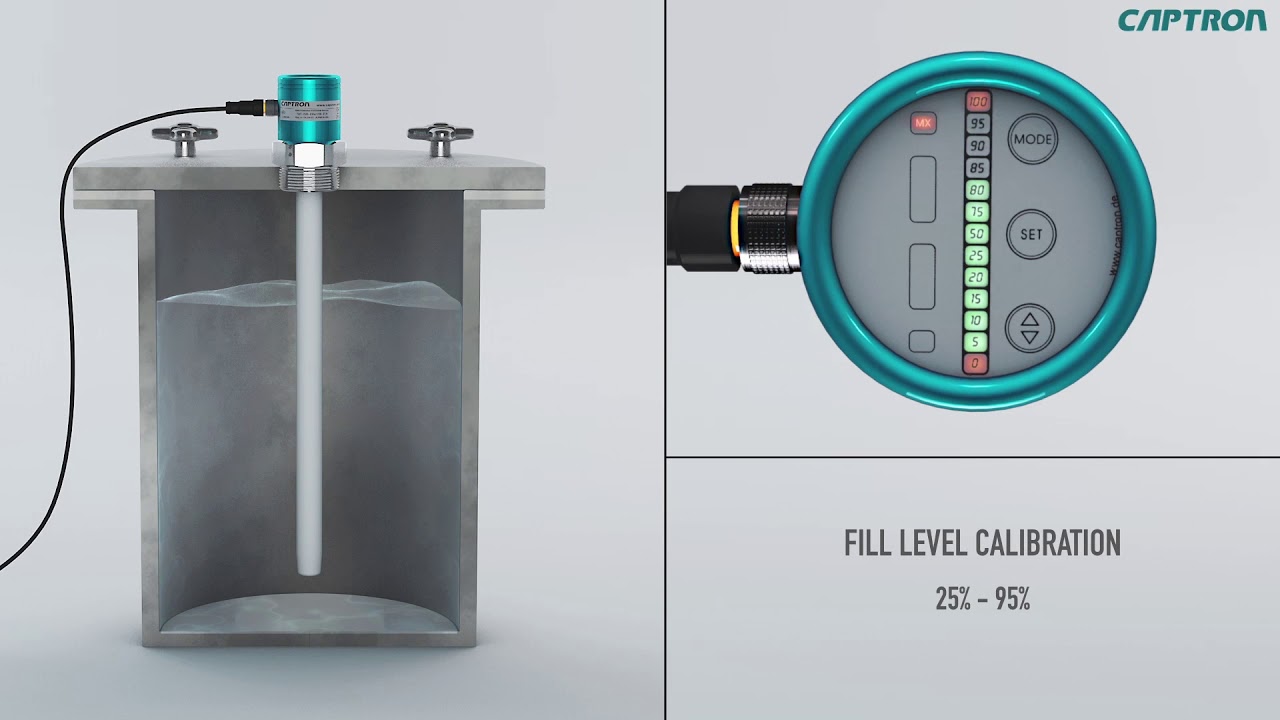 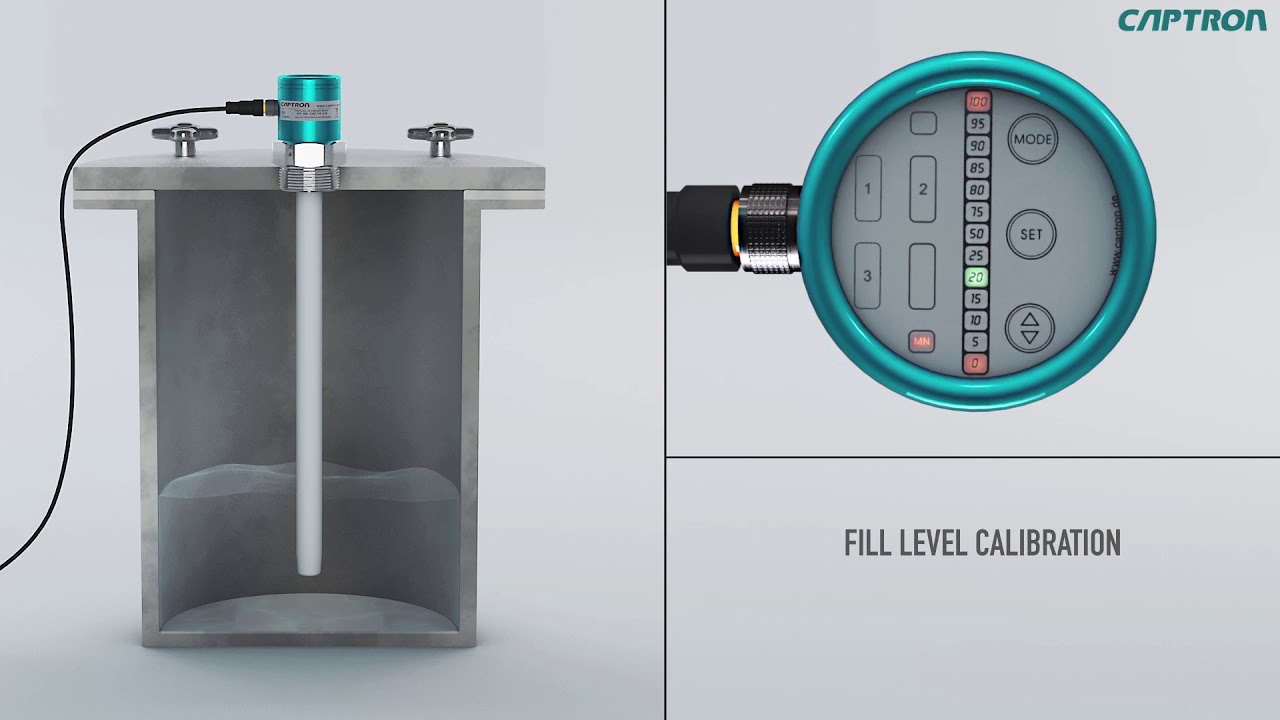 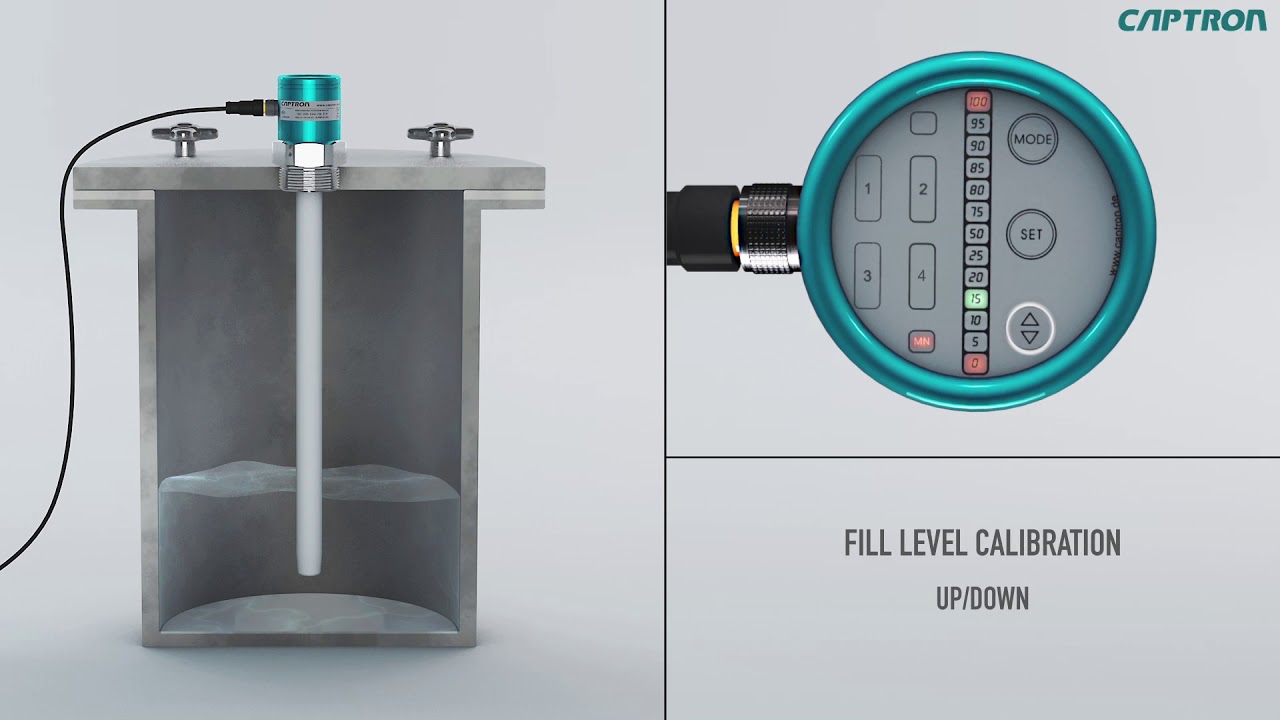 REACH OUT TO US